To Dahlia or not to Dahlia 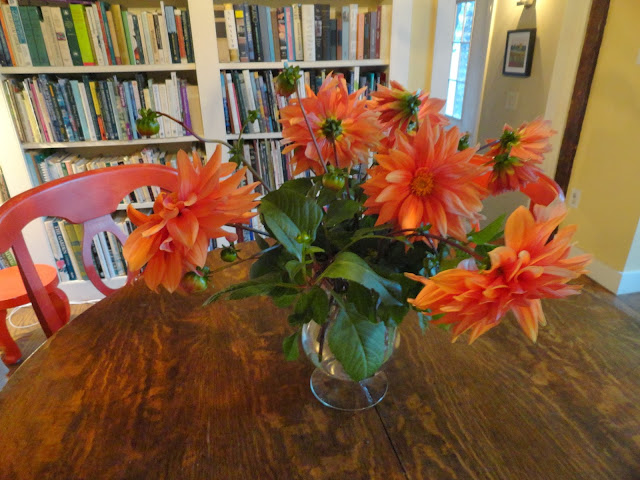 Just when I am ready to say that I am not going to save my dahlia tubers anymore because they never bloom until it's too late, they reward me with this. Not exactly as prolific as Paris or Giverny, they do produce a few blooms of beauty. I will say that when looking back at the season as a whole, these late bloomers do produce for at least a month in October, which is as good as any other perennial, and they are spectacular. This orange variety (name long forgotten), certainly looks good with fall colors as a backdrop. They just  take up so much garden real estate! 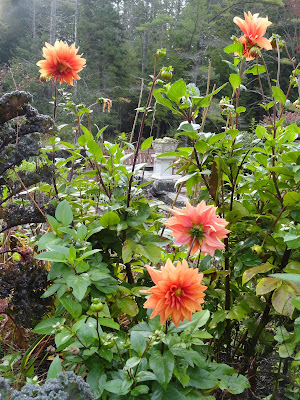 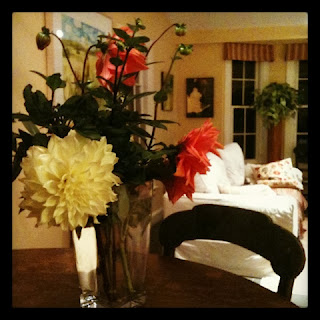 I start these tubers in February in large plastic tubs indoors. Looking like muddy dirt in black plastic, I tell myself how glorious late summer will be.  Then out they go as early as I think they can go (this year getting quite a bit of die-back from a late frost) and tons of fertilizer and compost heaped on. Then they grow and grow producing tons of foliage that needs to be staked and twined. Then finally, when everything is said and done and flopped over, they show their magnificence. Then comes an early frost and then we are really done. I dig up the tubers that are now weighing 20 lbs with dirt, huge and awkward, and I have to find a box large enough and some appropriate material to cover them, peat moss (garden centers don't have peat moss this time of year) or sawdust. Where do you get sawdust- and really-who is driving around to get a bucketful anyway? Fortunately this year with the barn construction, I have a bucketful! Then in the basement they go until next February. Is it all worth it? I am not sure. But there is something about getting rid of these massive tubers that I have nurtured for 5 years now, that I can't do. So on I go, shepherding these hard won blooms despite my reluctance this time of year.